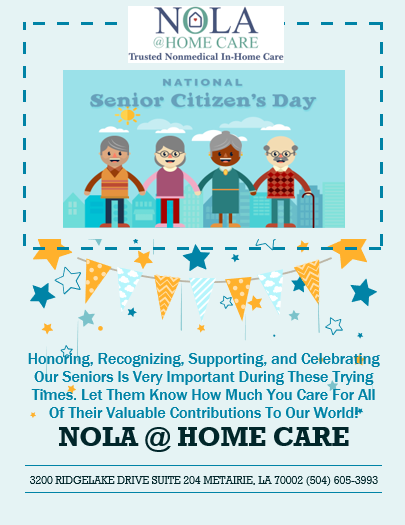 We want to reach out and wish all of our seniors a very Happy National Senior Citizens Day!  This day was created back in 1988 by former President Ronald Regan to honor our seniors that have done so much for our families, communities and country.  We are very thankful for the freedoms we enjoy due to their efforts and the education we gain from the wisdom they share.  It is an honor to work with and serve the many wonderful clients and families that trust us throughout the Greater New Orleans area.

The senior population continues to expand in the workforce as well.  According to the Bureau of Labor Statistics they project the workforce in the U.S. will be 164 million people by 2024 with an estimated 8% or 13 million of those workers being 65 and older.  Another interesting and encouraging statistic is that the 65 and older population make of the largest population group of self-employed individuals among all age groups.  The 65 and older age group is almost 3 times more likely to be self-employed than the 35-44 age group.